Email as first channel, but contact likes to choose

That is the conclusion of a recent study of the American MarketingSherpa at the end of 2015. They surveyed how a consumer likes to receive offers.

In this study a list of ten possible channels is introduced to an extensive set of consumers, neatly divided into men and women, baby boomers, generation X and Y. They requested to select the channels – with the relevant conditions -, where they feel most comfortable with. Several answers could be selected. So you should read the result of this graphic in combination with the different possibilities. 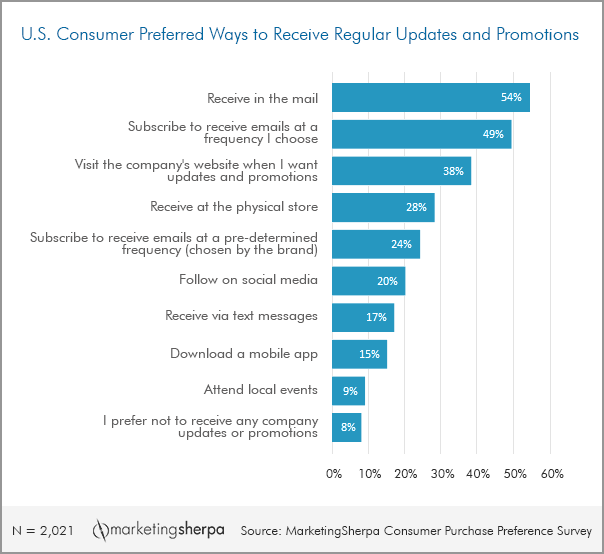 When it comes to email, the website, the social media or the physical location, then email easily wins. Note that you have to count up that result for yourself. Email based on a chosen frequency (49%) and email based on an imposed frequency (24%) together make a pretty score of 73 percent of the respondents. A nice distinction, but it was kind of frightning that the classic post still scores 50 percent. The website and the social media seem to falling behind seriously as a channel.

When we talk about frequencies, then we get an instructive lesson from this survey. The possibility to choose the frequency yourself is clicked on twice as often as the other one. That the brand gets the chance to decide independently when they end up in the inbox of the readers, seems less appreciated. Which the average e-marketer didn’t understand yet. What is the proof? To 455 among them the same list was presented, but then as possibility to approach the consumer.

Where the consumers assign a score of 49 percent to receiving email on a chosen moment, the marketers did the same with only 14%, a significant difference. To the contrary, sending email messages on the moment that the e-marketer finds it useful scores 76%. Here also a big difference of 24% from the consumers. But in the end, they both think of email as a very suitable channel.

And the social media

Where the consumers are still charmed with a classic post, e-marketers think of social media as most favorable with no less than 77%. These last received only a scant 20% from the consumers. Of course marketing is a game of give and take. The perfect channel for everyone clearly doesn’t exist. But this investigation learns us that we have to listen well to our (potential) customers.

Maybe it’s time to look at our opt-in forms again. Because at this present day, they have become very sober. We have learnt by now that the threshold should be as low as possible. Asking the email address is now the common denominator. We certainly don’t have to return to the situation of some years back, when the subscriber was asked an overload of questions. But the choice box about the frequency apparently isn’t wrong at all. Because otherwise those 49% might become potential unsubscribers… And isn’t that just what we are trying to avoid?

5 must-have elements for your newsletter

That first impression, you know by now. And then there are those email clients that do not spontaneously want to show your images. Today we give you five tips on how you can still save the furniture … Jun 4, 2013Michelle Dassen

Flexmail is nominated for the Digital Marketing Awards 2015

A few days ago we received some pretty big news in our inbox. The jury of the Digital Marketing Awards has nominated Flexmail in the category “Best performing Belgian tool”. Improving ROI and conversions, ease of use and service were key in the decision-making process. Oct 28, 2015Flexmail

How do you wrap your contacts for the holidays?

The holiday season is approaching. It is one of the most exciting times for e-marketers. First, because the number of campaigns traditionally increases, but also because of the major competition: it is even more important to stand out. Nov 20, 2013Michelle Dassen

Christmas is a pretty stressful time for lots of marketers. But it’s because everyone’s so busy that your marketing needs to be on point to get noticed during these busy days of the year. The pressure is on to get ROI on Christmas email marketing campaigns – use our tips to get results! Looking for […]

Are you getting the basics right in email marketing?

Do you ever wonder if you’re getting the basics right in email marketing? In our new episode of Flexmail TV we discuss what we think are the most important elements in email marketing. By getting these elements right, you are sending a well-constructed message to your audience that will definitely get you success. Sep 24, […]

Send an invoice with a strong CTA

The digitalisation is unstoppable. The days of the paper invoice seem to be almost over. Certainly in a B2B environment, the invoice is more often sent as a PDF via email. We also see that in our own inbox. The one time it’s an as good as empty message with an attachment. The other time […]

Make sure a welcome is a real welcome!

It happens easily. You fall on an interesting website that presents a fun newsletter. Let’s subscribe. And as it should be, our subscription was confirmed. Feb 20, 2014Ann Flipkens

Yahoo is rolling out the recycling of old email addresses. This action starts with the return – bouncing is the more technical term – of all email account that are eligible for reuse. Jul 7, 2013Ann Flipkens