Gold medal for email according to American research

Research of the American Pew Research Center recently showed that email is the most important online tools, for everyone who is working professionally. 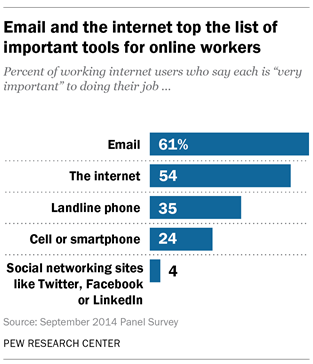 Pew Research Center is a nonpartisan fact tank that informs the public about the issues, attitudes and trends shaping America and the world. A survey conducted amongst internet users about the role of the internet in their worklives showed that email and work still go hand in hand. Only 4% ranked social media in first place. The study was conducted end of September, 2014 amongst a panel of 1.066 adult American internet users.

When asked in this study – more than half of respondents – 54 percent – said that they believed the Internet to be “very important” for doing their job. If the question was even more specific, six in ten (61%) American workers who use the internet say email is “very important” for doing their job. Far fewer workers describe landline phones (35%) or cell phones and smartphones (24%) as “very important.” There seems to be more primacy to the classic telephone wire. This was however slightly nuanced for those whose job requires a lot of traveling. But still, if you have to choose a marketing channel, telemarketing will get you less direct effect today when you compare it to email.

Clearly, email hasn’t only grown, but it also continues to mature. It was from day one destined to be the expected killer app, together with the internet – then called ARPANET. Email has clearly filled that expectation, according to a recent study. Even spam, SMS and social media, according to the survey results, aren’t able to compete with email for first place. Moreover, they also discovered a positive effect on productivity. No less than 46 percent of respondents reported that tools such as e-mail gave them the opportunity to be more efficient when working. Yet another reason to embrace email.

The research also revealed that email increases the world of people. Slightly more than half – 51 percent – of those surveyed indicated that by using e-mail they could keep in touch with more people than before. More than a third – 39 percent – indicated that e-mail gave them the opportunity to be more flexible when organizing their working hours. That is after all the advantage when comparing it to the phone. You counterparty shouldn’t necessarily be available to receive your message. But these figures also show that the working population is active in their inbox even outside the traditional working hours. Another additional contact time for email marketing.

Jan 24, 2015Thomas Vangelooven
Previous story5 elements that you should drop from your email marketing strategy for 2015Next story5 times simplicity and efficiency: LittleBits
Home Gold medal for email according to American research
7 years ago Strategy270

Give your automated campaigns a personal touch

Every decent email marketing platform offers the possibility to automatically send triggered messages. It’s a great way to boost your conversion. But as always, don’t overdo it. Feb 27, 2013Michelle Dassen

3 big trends in email marketing that you need to keep an eye on!

Email Marketing is a beautiful crossing between technology and marketing. This implies that email marketing is always moving. The emails we sent out ten years ago are ugly ducklings in comparison to all the beauty that an average email marketing platform delivers today. Jan 9, 2015Ann Flipkens

An animated gif as conversion driver

It’s a discussion that a lot of e-mail marketers love to get involved in. Can you include an animated gif in an email message? Will that be a problem for the spam filters? And what will be the reaction of the recipient? In the case of Dell, not a bad reaction at all! May 16, […]

Every year around March we launch our Email Barometer, in which we want to map out the strategy of Belgian email marketers, end uncover trends and expectations within the Belgian email marketing landscape. But this edition, thing will be a bit different. With the arrival of the new General Data Protection Regulation, we want to […]

My first week as an intern at Flexmail.

12 weeks of internships seems like a long time for students. In some cases that might very well be the case. For me on the other hand Friday came around in the blink of an eye and there I stood with a drink in my hand at the team mixer. The first week of my […]

Email doesn’t always need to be a part of a large marketing campaign. When you take a look at all the automatic emails that are sent to clients and prospects, you’ll see that there are a lot of optimization opportunities. A sale in your store is the ideal moment to transfer from offline to online. […]

On 16 November, I headed off to the Advanced Email Conference in the heart of London. My expectations? Discovering new speakers, finding inspiration and checking what topics kept the UK e-mail landscape buzzing! Interested? Critical comments, self-reflection and new learning moments coming your way! Email geeks My first impressions of the audience? Positively-minded marketeers, determined […]