The Indianapolis Symphony Orchestra has put a lot of effort in collecting email addresses. Its mailing list had thousands of email contacts. But in spite of their large volume of addresses, they were getting very low conversions. Optimizing the subject line, the call to actions and the content in general didn’t change much. It was time for a new approach, as we read in a study done by Meclabs. 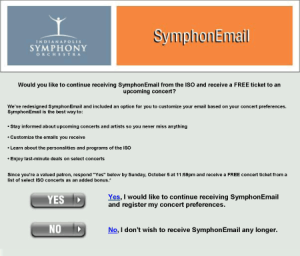 This new approach was found in a double opt in campaign where the recipient was asked if he was still interested in receiving email messages from the orchestra. If a contact didn’t respond, that email address was removed from the mailing list. At the same time they asked the reacting contacts to check which music genre they liked best. The first step towards segmentation had been taken!

In Indianapolis they figured that it isn’t enough to clean up your mailing list: you also have to evaluate your own email marketing strategy. Because if you just continue without changing anything, you would be left with a mailing list with bad performance rates after a couple of months. The contacts who are interested in pop, aren’t sitting and waiting for an email that promotes a classical concert with heavy Bach pieces to fall into their lap. Before you know it, you lost the interest of you subscribers. The Indianapolis Symphony Orchestra allowed their subscribers who responded to choose between a wide variety from pop to classical music, from concerts and a musical ‘happy ‘hour’ to lectures.

The relevance of the Orchestra was also translated into a new template and a new rhythm. The look and feel of the messages that the symphonic orchestra will be sending in the future will be identical. The pop lover as well as the Bach fan will visually get the same email messages. But the content will give another message based on the program. With this method, they only need one template. It takes out any risk of mistakes in segmentation, and it gives them the possibility to differentiate automatically. It also helps improve the visibility and branding of the Indianapolis Symphony Orchestra.

The reactivation was also meticulously planned. With the subject line: “Email never sounded as good as with Symphony mail! Confirm now!” they set the tone. If you want to send a reactivation email, the message is important as well. First they explained that they completely changed the concept of the newsletter. This is very important: you want to avoid letting your contacts think that they need to confirm – or worse deny something – to keep getting the same mess. They made a list of all the novelties. Two clear headlines with a clear call to action closed the message.

The message was sent several times. After 6 months the people who didn’t respond received the message another time. In that reminder campaign, the contacts who bounced because of a full inbox were also included. In a third wave they tried one last time to reach the bounces. At first sight the results were dramatic. No less than 95,9% of the email addresses disappeared from the mailing list. As email marketer this could make you want to throw in the towel. 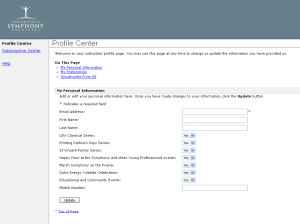 But that’s not what they did in Indianapolis. They kept their promise from the reactivation message. Every two weeks they send a relevant email message to the remaining addresses. They also worked on getting new contacts for their shrunken list. New clients that purchased a ticket via the website were automatically asked if they wanted to be a member of the correct mailing list. Because from their concert program and purchasing history you can clearly identify the preferences of the buyer.

But they also used other channels. For every one that called for information, the employees of the Indianapolis Symphony Orchestra mentioned the newsletter. That way a lot of email addresses were also added to the mailing list. Competitions and sweepstakes for other activities where passers-by could fill out a form to win tickets also performed well. The winners were announced per email. And at the same time these email messages included an opt in message resembling the one in the reactivation campaign.

The results were overwhelming. The online sale of tickets via the email campaigns doubled almost instantly after the start of the campaign, and represents now over 35% of the total turnover. Of the recovered email addresses, over 40% bought a ticket. This means that you can shake up sleeping contacts pretty well. And however not a lot remained of the original list, it quickly recovered with the subscription form, the extra efforts by phone and through competitions.
In Indianapolis they are convinced. Drastically taking action can really pay off.

Do you have a similar experience? Please share it with us in the comments!

May 2, 2014Thomas Vangelooven
Previous storyBe creative with the alt tagNext storyAn animated gif as conversion driver
Home How an American symphonic orchestra thinned its mailing list and doubled its turnover!
8 years ago Strategy348

Use the delay to your advantage!

You launch an email marketing campaign! And in the first following hours your email get conversion. And then slowly but surely the graph of the registered clicks moves towards the bottom. Jun 18, 2013Ann Flipkens

10 elements – from simple to refined – of a great email

Recently this email landed in our inbox. By just looking at it for a couple of seconds we saw that this one is an example that we should share with you. This email message from Thalys is brilliantly simple, and the details show that a lot of thought went into this message. We’ve made you […]

Bloopers you can avoid

Email marketing is not only a form of inspiration, but also one of transpiration. There are so many details that you need to keep an eye on. Before you know it, you can write down another immortal blooper on your list. Dec 27, 2012Michelle Dassen

The life of an email marketing campaign

In the email marketing platform Flexmail, each account will see a new dashboard being displayed. The new dashboard will display many relevant features together, that will not only sharpen your email marketing, but will also benefit your sales. Apr 5, 2013Thomas Vangelooven

Place an ad in your message

Email marketing is always looking for conversion. We do that by designing a captivating email with a rock-solid call to action. But now we see a new trend pop up! Jan 25, 2014Ann Flipkens

From offline to online customer communication in 8 simple steps

Almost every offline store has a loyalty card. If you’re not so sure, just ask a lady’s wallet. The prestigious “Le Bon Marché” in Paris also offers one. Entirely offline. But with the first welcome email they’re already working on getting their customers active online as well. Aug 28, 2015Ann Flipkens

Litmus and Microsoft are cooperating

The message and spam check is a service that Flexmail offers her clients a long time already. Via the message check the users get the chance to test the display of their email message in all well-known email clients to verify whether their email message comes across the most common spam filters. For this service, […]