Is it getting time for your company to implement an email template for mobile readers? Don’t let the callouts of international trend watchers guide you. You can answer that question yourself. 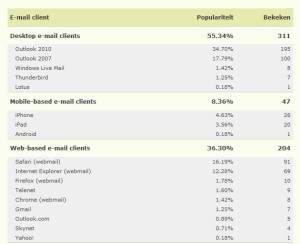 A lot of numbers are going around on the web when you’re talking about mobile emails. According to the numerous trend predictions that pop up at the end of every year, the rise of mobile is written in the stars. But before you’re throwing away your current design, it’s not a waste of time to check your number of mobile readers. Because this number can be very different for every audience and market.

For that reason we’ve added the client report in Flexmail. In that report we gather the number of readers who really opened your message with a mobile device.

Of course we also give you some additional information. You can for example discover precisely which email client is most popular amongst your recipients. Are they mostly Outlook or Gmail readers? Or do they prefer an iPad?

But let’s take a closer look at the numbers. In a campaign we recently sent (image) you can see that around 8,5 per cent of the recipients looked at the message with a mobile device. That is starting to add up.

When we look even further, we can see that 3,56 per cent of the mobile readers uses an Pad to read the email. there is a lot discussion whether an iPad can be seen as a typical mobile device. The width of the screen can be compared to the width of a compact laptop. This means that the typical one-column structure that is advised for smartphones, isn’t immediately necessary for an iPad.

With the iPad also the mobile aspect is less important. The device is perfectly designed to accompany you when you’re on the road, but consumers usually use it at home. This means that people who open their emails using their iPad, usually do this after the working hours. And that also has consequences for the ideal time of sending.

Just as with smartphones, you use your fingers to operatie an iPad. A fingertip is less refined as a cursor. This means that you need to include more white space in your newsletter, with links that stand alone , rather than in text blocks.

How to start with email marketing

10 elements of a great welcome message

Email marketing is the ideal instrument to send timely messages. And that without even moving a finger. If you have a working connection between the dates of your database and your email marketing platform, you can automatically go for a conversion. Jun 6, 2014Michelle Dassen

My first week as an intern at Flexmail.

12 weeks of internships seems like a long time for students. In some cases that might very well be the case. For me on the other hand Friday came around in the blink of an eye and there I stood with a drink in my hand at the team mixer. The first week of my […]

In email marketing, it is important to draw the attention of the reader to read your message as detailed as possible. But we know only too well that we have to share this attention with other email marketers. Therefore, we have to keep in mind that sometimes we have only a few fractions of seconds […]

Open the gate to the inbox of your target group

We spend so many time trying to optimize every little detail of our campaign. We want stunning images and we ponder on for hours on that one font, matching colours and the right amount of whitespace. We invest blood, sweat and tears in our emails. And then there is nothing more heart-breaking than having to […]

Litmus and Microsoft are cooperating

The message and spam check is a service that Flexmail offers her clients a long time already. Via the message check the users get the chance to test the display of their email message in all well-known email clients to verify whether their email message comes across the most common spam filters. For this service, […]

Which info are you including in your footer?

We are often concerned about our subject and everything that can be seen in the preview when designing a message. And then our attention shifts to the call to action. And at the end of the message, we close. But there are a lot of opportunities that can be forgotten. May 1, 2013Thomas Vangelooven

4 elements that distract your contacts from your newsletter

Email marketing is not just dropping a message in the inbox of a contact. It is all about attracting the attention of your reader. This attention should ultimately lead to the desired conversion. Jun 12, 2013Michelle Dassen

Hyper-personalization is the next step