No American president without email marketing

That the battle over the White House in the United States has erupted, there the news reports leave no doubt. But does email marketing play a big role here? We went to nose about in the campaigns and came to a disconcerting conclusion: no new American president without email marketing.
During the previous elections, president Obama has put up this email marketing tool with an almost unbelievable perfection. That is why the candidates of 2016 see email as an inseparable part of their campaign. But each with their own accents. We selected the two most prominent: Donald Trump and Hillary Clinton. 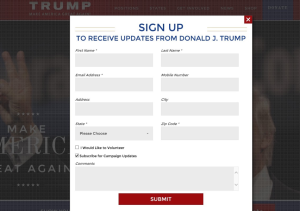 This man combines complexity with simplicity. The complexity consists of getting to know the public very well. Demographically seen there are quite some differences in the big patch of land that’s called America. You can’t come up with the same message in the South as in the North. Like Trump adjusts his speeches to the region, he adjusts his email messages as well. He swears allegiance to the idea that context and expectations are strong principles to build up a lasting email relationship.

That’s something you immediately see when you look at his opt-in form. He tries to collect as many information as possible. Name and email are mandatory. But he also wants to find out the state and the postal code. And in one go he also tries to get to know your address and telephone number. Not that this is useful for email marketing, but it is useful for the offline and telephone campaigns. Email marketing is put up at once to feed the general marketing.

“Make America great again”, that is the baseline of his campaign. Simple, clear, not difficult to understand. Of course not every e-marketer has it so easy to tell a complete story in four words. But Trump keeps it simple in the inbox. Everything is one variation on these four words. Trump mostly uses email to implant an idea in the people’s minds. In the email they don’t make use of the possibility to launch real call to actions.

She handles a different approach. She proceeds on the experience that Obama built up in the final race to the presidency. The campaign of Obama focused among other things to personalised landing pages. They continually tested to create the most optimal forms. The bulk of 690 million dollar that Obama fetched with online donations, can be attributed to email marketing. For each mail, they tested with 18 versions against each other. And for Hillary Clinton, it’s no different. The subject line, the general content, the layout and the proposed amount for the donation.

There you immediately see the first difference with Trump. In her opt-in you only have to fill out two fields. The first is of course your email address, the second is your postal code. This last one will serve for the differentiation per region. Furthermore, nothing is being asked. Email marketing is clearly the primary goal. And that collecting donations is the main goal, you can see on the landing page that you get to see after confirming the opt-in. Trump welcomes you in the victory tour, Clinton suggests to immediately donate $10.

It is striking that the email message of Clinton are as good as entirely text based. Barely any CSS and layout. As to content, they test differently, depending on reading behavior. The sending name ‘Hillary for America’ is a fixed item, but the additions vary from ‘Welcome to Team Hillary!’ to ‘Welcome aboard, and thank you. Now take the next step’. But the content is a bit businesslike.

They refer to the news topics of the day, the stupidities of the competitor, the little successes of the campaign. Often the campaigners let the complete family show up. One day Bill is in the inbox, the other day Chelsea, in order to get the feeling that Hilary addresses you personally for a few days. But she never puts up sloganesque language such as Trump. But each time we see the highlighted red CTA: Donate $1! 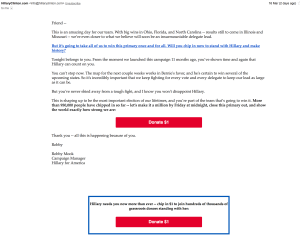 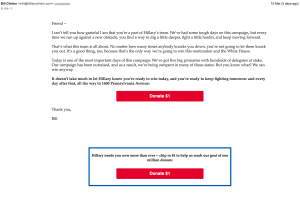 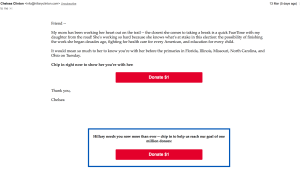 Another three powerful tips to convince your client (part 2)

Topic of the month: Marketing Automation

Marketing automation is the ideal way to deliver the right message at the right time to your potential customers. Many companies believe that marketing automation is created for lazy marketers and results in impersonal messages, but you can quickly put that assumption to the side. It needs constant care and attention in order to achieve […]

Is the essence above the page fold?

The example that we put up here instantly reminded us of the technique of the newspaper world. Sometimes in the digital world we can learn a lot of the print world. There is something like the expression “above the fold” … Jan 29, 2016Ann Flipkens

Personalization and targeting are trends for a long time already within digital marketing, and there we within Flexmail are heavily anticipating on. We launched extensive segmentation options, interest groups, preferences and the Workflows in the past to set up elaborate marketing automation scenarios. Also Contact Related Content is in our arsenal for some years now, […]

What does new European Privacy regulation mean for email marketing?

It happened, after four years of work, almost noiseless. The European Parliament has recently approved new measures that give civils more control about the digital use of their personal data. We take a second to have a look at the consequences on the terms of email marketing. Apr 15, 2016Thomas Vangelooven

Is there a perfect timing to send your email campaigns?

You probably already wondered when you’d best send out your email campaigns. In this new episode of Flexmail TV we give you our views on the myth of Tuesday and Thursday. Jun 25, 2014Michelle Dassen

Communicating in times of crisis

We have thought long and hard about sending out an email in relation to our services during the current COVID-19 crisis. To start with, a few reassuring words: our entire team is able to work from home. There will be no impact on our services and you will still be able to contact our support […]

An email with a weird message

Studying email messages is our hobby. That is why we are always happy to see new examples pass by where we can learn from. Because they do well, or because it can be enhanced. This B2B newsletter grabbed our attention. Quite some lessons to gain… Jan 15, 2016Thomas Vangelooven