This blog has taken off due to a small article in the newspaper. Google has come up with something new. Google will suggest answers to the users on the Gmail platform. What can we learn from this in terms of email marketing? 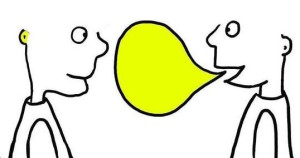 The principle is very simple. When an email message comes into your Gmail account, Google will read its content. Google has been doing so for a while actually. Because what they can track in the content will be used to place an advertisement next to the message. But now they will also suggest a standard answer. The user can choose between a few options, add some content and it’s done. The system is supposed to be self-educating. According as the actions of the user, the suggestions will be more accurate. Until the user doesn’t even have to click the button anymore to answer standard email messages. What can we learn from this?

First of all that Google presumes conversion. An incoming email message requires an answer. In your working environment you often see an answer to an answer to an answer. Email is for many people a way to communicate. So they tend to write an answer, even if it was something dull such as ‘okay’ to a message that was rather meant to be rhetoric. Incorporate that in the world of email marketing and compare it to numerous no-reply@bedrijfxyz.be that have been used, and you will know.

Furthermore we are almost certain that with the thought that an automatic answer will be generated and sent, quite a few readers must have frown. Indeed, the technology is still far from capable doing that. Answering emails still remains human work. Only we organised it in a way that we have turned off the human intervention as much as possible. Email platforms are fully automatic. And there is nothing wrong with that, because otherwise email marketing would never have been the mass medium it is today. But maybe we can take a first step already by creating a real address instead of the no-reply one.

Research organisations are often testing what happens if you suggest an answer to a no-reply address or even another mailing address. These are the results from the hundred email messages sent out as an answer to the email marketing message. From time to time it was zero, but most of the times we didn’t come further than one or two. Although an answer from a person from flesh and bones can really work. Read more about that subject in this blog which is still up-to-date! Here an action has been put to a stop where it intended to have a conversation with the recipient of the message.

When we see how quickly people react and react again to a post of an acquaintance, you can tell that a email marketeer is jealous. The conversion between friends is high. That has two reasons. First of all because they are friends, which makes them react faster. You will notice that too when you aim at old familiar customers for your email marketing campaign. They will click through more quickly than the recipients who read the email for the first time. There is a second reason as well.

Reacting happens on the spot where the message gets read. Conversion implies at least that a browser gets opened, a landing page is loaded and two actions are taken. How many seconds of patience went over the process? Why not even take the risk to explicitly request a reply? Who dares? And who will inform us when it has succeeded?

Am I hearing you right? Stopping a campaign? Indeed. Let’s illustrate our statement by an example. Imagine that Pinterest sends the following welcome campaign to her new subscribers: Day 1: Welcome! Day 2: Here some nice boards to follow Day 3: Create your first board! Day 4: How to share your board with other Pinteresters? […]

The life of an email marketing campaign

In the email marketing platform Flexmail, each account will see a new dashboard being displayed. The new dashboard will display many relevant features together, that will not only sharpen your email marketing, but will also benefit your sales. Apr 5, 2013Thomas Vangelooven

Make sure a welcome is a real welcome!

It happens easily. You fall on an interesting website that presents a fun newsletter. Let’s subscribe. And as it should be, our subscription was confirmed. Feb 20, 2014Ann Flipkens

How to make yourself GDPR compliant in 7 steps

GDPR has been cause for discussion in many companies. That is why we compiled a list of things you should do now to make sure that you’re ready for May 25th. 1. Awareness Consult different sources to make sure you understand what GDPR entails and what you have to do to be compliant. You can […]

Email marketing is without a doubt the best tool to awaken sleeping and inactive customers. But how do you do that? With a beat of a hammer, or by singing a lullaby? We’ve put the two options to the test. Mar 8, 2013Michelle Dassen

A clear story in 3 phases

Very often we see some magnificent email messages dropping by. There are e-marketers that swear by e-newsletters that are charged with figures and where one message follows up the other, far in the inbox. Others like to use a nice visual, but limit their message to one single core. Such an example we have put […]

The winner is the smartest, not the biggest

When you ask an average e-marketer what makes him the happiest, then the answer often is ‘a list with email addresses as big as possible’. Another e-marketer which calls himself smart, would rephrase it differently. Jan 8, 2016Thomas Vangelooven

The tourism industry: A ray of sunshine in your mailbox

Endless white beaches, ancient architecture and beautiful settings.The tourism industry has everything it takes to make its customers long for vacation using just one image. unfortunately images alone won’t be enough to convince the customers to choose your travel agency. You have to entice them to take that final step and trust you to take care […]