Lots of email messages sent as a e-marketing campaign are coming from a no-Reply email address. When another sending address is chosen, it’s usually out of marketing considerations. Actual responses aren’t expected. 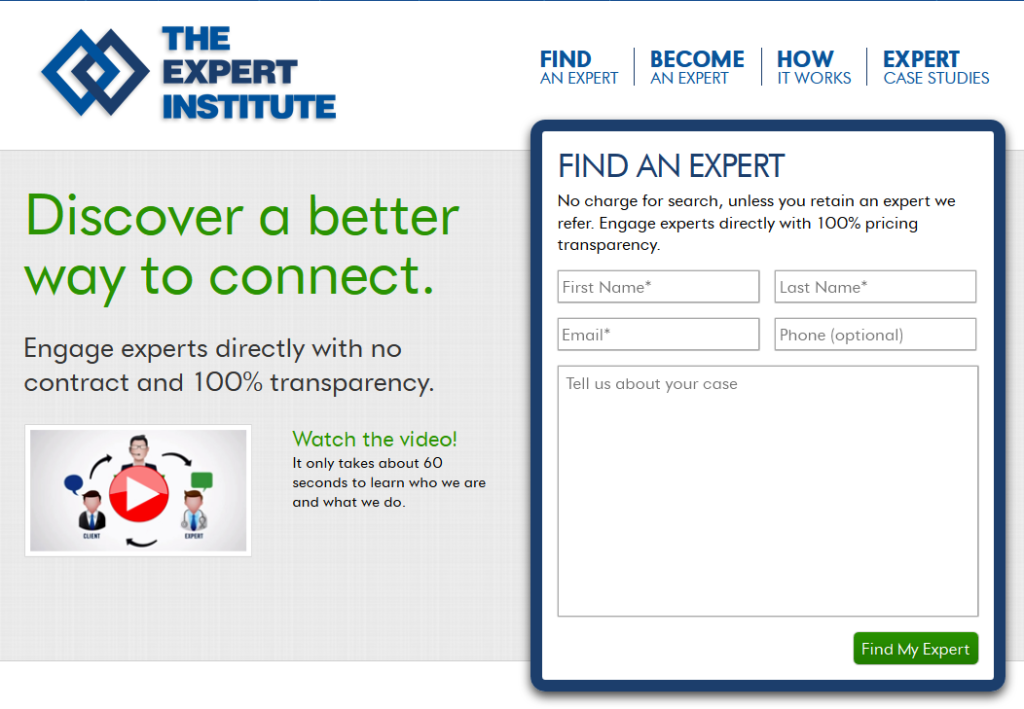 For that goal, call to actions were added to the message. An update and unsubscribe link are usually included as well, which should suffice to receive reactions for readers. It has its benefits for your results, but there’s also a disadvantage: reactions are still automatic and look kind of artificial.

Let’s do it differently

The Expert Institute, based in New York, wanted to things differently. They are a fast growing service platform for matching and directly connecting professional firms to specialty practitioners, industry thought leaders, and academics. Being a startup, they figured they wanted to take a different approach in their marketing, to differentiate them from their competitors. Email marketing became the base of their strategy, but with a twist.

They found their “twist” in their VP of Client Relations, George Cuchural. Not only did he become the face of their campaign, he also became the sender of the email. In a first email message – a simple message – he introduced himself and the possibilities of their product to their prospects. The goal was simple. Letting their contacts know that an actual human being was speaking to them; one that was willing to start a dialogue with them.

Once a month, they continued the conversation with a specific newsletter. Again, the salutation was personal, and it was the Vice President explaining the new possibilities of their products and services. He also explained ideas and offered exclusive whitepapers.

Every email ends with the following message: ‘”I’m here to answer all your questions, or to see how we can be of service to you. And in the meantime, you can find all the tips you need to select a good expert in the following whitepaper”.

Of course all these messages offered CTA that contacts could use to click through to the website and registration forms. But at the same time, the VP also received personal replies on the messages. Some emails saying “thanks for the information, but not needed right now”, but also “I have some questions, let’s schedule a call to discuss them”.

Readers writing back with a personal message is not the conventional way to convert prospects. But their approach got that much responses, that they compiled a file with all people who responded. That file could be accessed by the sales department, who could personally contact the prospects who replied.

In a company with a CRM or other type of database, that could be done even more efficiently. And to be even more personal, the VP would also keep an eye on responses. If it fit his time schedule, he would call to future client back himself. It can’t be more powerful than that.

The personal approach wasn’t the only thing they changed. They examined their contact database to check if all names were filled out correctly. That was necessary for the personalized salutation. They also used A/B testing on their subject lines. Those are elements that were part of the success of their strategy.

They haven’t changed much in their follow-up. They still use the personal approach. But they started implementing more automatic features. The contacts are being grouped by recent activity. Contacts who always open will receive more email messages than someone who only opens the emails occasionally. Based on clicking behavior they adapt the content of the newsletter. But those are all successful measurements that are being used by lots of companies. The unique thing here is how they deal with replies.
Do you have other examples?

Aug 4, 2014Ann Flipkens
Previous story10 elements – from simple to refined – of a great emailNext storyGetting an unexpected message across with images in 9 simple steps
Home Replace the ‘No-reply’ as sender of your email by an actual human being
8 years ago Uncategorized765

Send an invoice with a strong CTA

The digitalisation is unstoppable. The days of the paper invoice seem to be almost over. Certainly in a B2B environment, the invoice is more often sent as a PDF via email. We also see that in our own inbox. The one time it’s an as good as empty message with an attachment. The other time […]

Email marketing is back from never being gone

Email marketing regularly dares to be the center of a much-discussed topic: is email really a dying communication medium? Many marketers claimed that traditional media are stepping aside for new communication media such as social networks and apps. Of course we are not disputing the decreasing effectiveness of a mass communication medium that sends one […]

… in order to make sure you don’t show your contacts a big blooper. We got a real fail in our inbox this week. In response to the elections newspaper “De Tijd” wanted to promp their contacts to visit the website. And something went wrong there. May 30, 2014Ann Flipkens

It was a coincidence, but when looking for a software for the recording business processes, we subscribed to two trial versions at two different companies. Of course you will get a neat – like the laws of email marketing demand it – welcome message. Only they both differ significantly from each other. We put them […]

We already showed you how to create a succesful opt-in on your website. A great welcome message should follow. That’s the base. Usually, you wait until the next step to construct your commercial story. Shoe seller DUO takes an interesting approach. Nov 17, 2014Michelle Dassen

The context in which someone receives an email message is very relevant. Sometimes the calendar can give us a hand with this relevance. We are back with a series of seasonal email campaigns. Oct 9, 2015Thomas Vangelooven

Design, How to start with email marketing, Targeting, Testing, Tips

Let your CTA stand out!

Of course an email message contains a call to action. And therefore we certainly have to implement a big button. Survey found in the past that a CTA based on a button increases the click through rate with 28 percent in contrast to a CTA presented in the shape of a link. Reason enough to […]